I am feeling envious. Envious of those researchers, or research leaders, who have found a particular niche area, and who are able to spend the majority of their time there. I am at a project meeting for one of the 4 projects I am involved in at the moment. It so happens that the work my group does at the moment concerns 3 distinct geographical regions: the Sahara, the Brazilian rainforest and the South Asian monsoon. In each case, my interest is in the role that aerosol could play in driving regional weather and climate, but in each case the background is very different. On days like today, I am having to catch up with the basics of biomass burning and all the previous literature before I am even on the same page as those who are working more continuously on one area. 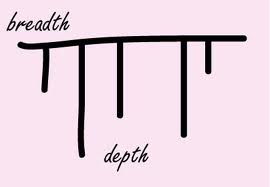 It ultimately comes down to the old breadth versus depth argument. Ever since I started winning research funds I have always had quite a few different strands of research on the go at any one time. This is interesting and exciting, but can be exhausting to keep up with. At one point I had people or myself working on 7 different topics. I felt like I was constantly behind on all fronts, although all projects were interesting. In the end, I breathed a sigh of relief when one or two of the projects ended. For me, breadth has worked so far, but at moments of low self-confidence I sometimes wonder whether the broad approach that I sort of fell into (possibly related to inability to say no?) was the right decision.

Breadth versus depth is an age-old discussion at all levels of education, in all fields. To me it seems necessary to have some degree of flexibility in terms of research area since the very process of doing research opens up new questions, and more pragmatically, sometimes funding is easier to come by in some areas than others.  Again, opinions amongst colleagues are divided between those who “chase” funding, and those who stick to a narrow area even if it means research grants are hard to come by (not all institutions will be totally happy about this given the way research funding is used as a metric). Most of us are somewhere in between. This variation regarding the importance of breadth vs depth has unfortunately reared its heard in discussions of potential academic hires –  in one case that I was witness to a long time ago, the breadth appeared to be valued differently depending on whether the candidate was male or female – in the case of the male, breadth was viewed as positive and creative – in the case of the female it was discussed as “lack of focus” etc. Not our finest hour…

It’s a question that I get asked by postdocs and more junior academics very frequently, not just in terms of research area, but also the balance between research, teaching experience and other academic activities. It’s also something that varies between graduate programmes in different countries , as discussed in this article by Robert A. Segal for Times Higher Education. My usual response is to say that it varies and point to examples from within our department of those who are incredibly narrowly focused, and those with a broader portfolio. There is success in both cases (but then everyone’s definition of success is different too!).

When I was a junior lecturer, my line manager at the time Prof Alan Thorpe, now Director of the European Centre for Medium Range Weather Forecasting, asked me to draw a map linking my various current research projects together and to identify 2 to 3 common science questions or themes. Then, each time a new opportunity presented itself, I was to use this to consider whether it was either central to one of my themes, or developing a new theme that I had in mind to expand at the expense of something else. At the time it was useful in clarifying that there were some universal themes across all 7 projects. For a few years it was helpful in giving me a reason to say “no” to some requests. I periodically review and revise this map of my strategy and still find it a useful process. I don’t think its giving too much away to show the version as at 2012 with the projects that were running then. I still have lots of things going on, but can see that at that point there was more emphasis on modelling than work with observations – perhaps a reflection of being a parent and not wanting to go away on fieldwork quite so much. Looking back at earlier versions its interesting to see how some things have evolved (the balance of modelling vs fieldwork whilst other aspects have remained more constant (the use of idealised experiments to understand processes). I wonder what future versions will look like?

Did you know that eating 135g of brazil nuts gives you the same dose of radiation as one dental x-ray?  Nope, me neither. Clearly this is an example of good science communication because it has stuck with me long after I heard it in a conference session this morning.

I have spent the day at the Science Communication Conference 2014 of the British Science Association. It’s my first time at this meeting, and I’m really enjoying thinking about this aspect of my role. The key note presentation by Mat Lock (@matlock) of storythings.com  described the world of digital attention, and discussed the importance of trying to relax about transgression – the lack of control that you have when and how other people share your tweets or blog posts. He emphasised that in fact, we need transgression to get our stories told to a wide audience, and that what we need to do is to develop new skill akin to comedians dealing with hecklers. Relevant to my aspirations concerning science writing, he also emphasised that the only way to be successful in the digital world is to put lots of things out there.

The importance of getting on and doing it was also emphasised in the science writing workshop by Jon Tennant (@protohedgehog), who pointed out that the only way to learn is to write, and to see what feedback you get. In that workshop we got to consider which stories might be most attractive to different audiences, and to practice converting an article abstract to a summary for the general public. We also then critiqued someone else’s attempt and got feedback on our efforts. The session on “communicating risk” was full of examples directly relevant to my research – climate change, floods and even black carbon made an appearance.  I was reminded of the importance of understanding when framing is being used to present numbers ( the difference between saying “it could be as high as” compared to “it is very unlikely to be more than”. The difference between relative and absolute risk was brought home by Gerry Thomas in the context of radiation exposure. David Speigelhalter (@d_spiegel)  introduced me to the idea of using frequency trees to express risk and demonstrated the importance of using metaphors and analogies to relate outcomes to things people understand – normalising the risk. I finished the day hearing about Zombies and robot safaris and participating in a hive mind experiment where tens of us” independently worked together” to stabilise a tightrope walker being pelted by tomatoes via hand-held clicker devices. Although I don’t plan to be organising one myself anytime soon, I now know a lot more about science festivals, as well as psychology!

It’s also been an interesting experience to attend a conference where I know no-one. Most of the attendees are professional science communicators working on a variety of outreach  or engagement projects. There are only a few academic research scientists here (question: what is the difference between a researcher and a scientist? Answer: A scientist is a researcher with added importance). This has felt like a far more interactive experience than the usual conferences I go to. I think this is probably down to three things: 1) it’s a communication conference so people communicate for the love of communicating, 2) there is a “do it” strand of workshops including the science writing one I went to and a speed-networking event; 3) there is no comfort blanket of known collaborators to wrap myself up in. I have been motivated to talk to new people, and indeed been actively encouraged (i.e. forced)  to do so.  Not usually the most confident networker, I’ve felt curiously at ease here. Perhaps it is because I have nothing to lose – there are no expectations of me and my research reputation is not on the line. Tomorrow brings sessions on representing women, informal science education and working as a freelance science communicator. And maybe more about nuts – who knows!

Lead From Where You Are

Helping you make an impact, wherever you sit in the hierarchy

Bringing hands-on science to the next generation

Essays, photos, and discussion about prairie ecology, restoration, and management

...and Then There's Physics

Astronomy, space and space travel for the non scientist

A variety of views from an office window, and what views they are....

Bringing Science to the People

Adventures in climate science, diversity and inclusion, academia and life (2013-2018)

Adventures in motherhood, academia and science

Adventures in climate science, diversity and inclusion, academia and life (2013-2018)

Will Morgan's thoughts on air pollution and climate change